When magma hits water, powerful explosions can occur. This type of eruptive mechanism is known als "phreatomagmatism". More general, researchers talk about "fuel coolant-interaction". In case of the Havre eruption, both, magma and water were present, and the abundance of fine ash indicates that large amounts of energy must have been involved during a certain eruptive stage.

So could explosive magma-water interaction be what happened at Havre?

In order to answer that we first have to recapitulate what we know so far about phreatomagmatism from subaerial eruptions (i.e. eruptions which occur in the open air or on the earth's surface) and lab experiments.

Typical MFCI experiment with a basaltic melt. Note the impact of the bullet, which triggers the explosion. This experiment was conducted at Physikalisch Vulkanologisches Labor, Uni Würzburg, using remelted pyroclasts from the 2004 Grímsvötn eruption. (For details see Dürig et al. 2012 [1].)

What you see above is a steel crucible in an induction coil. In it a basaltic melt is brought to high temperatures (in the depicted case: 1200°C). What causes the melt to explode?

The following illustration shows the situation inside the crucible right before the chain reaction starts. 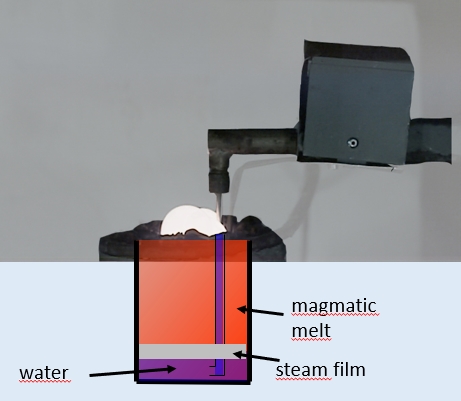 Situation before the MFCI is triggered: 10 ml of water has been pumped through the verticle pipe, forming a water pocket at the bottom. (Note that the added volume caused the melt to bulge).

An MFCI experiment starts by inserting a pipe into the melt, through which a certain volume of water is injected. This entrapped water forms a pocket within the melt. Immediately after contact, a vapour film is established, which immediately isolates the cold (liquid) water from the hot melt.

This effect is known as "Leidenfrost" effect: Ever seen a water droplet on a hot cooktop and wondered why it does not immediately evaporate as it should? The paragraph before spoilered the answer: the immediately formed microscopically thin vapour film impedes an effective heat exchange between cooktop and droplet -and the droplet stays "cool and alive".

The same thing happens in the "pre-mixing" stage of a MFCI scenario: cold liquid water and piping hot magmatic melt co-exist, separated by the few micrometers thick vapour film. Naturally, even under perfect atmospheric conditions the vapour film is not very stable. It can easily collapse, for example, when being hit by a shock wave.

In the MFCI experiments an airgun was used to initiate a controlled vapour film collapse. Note that the impact energy of the bullet is ~5 J, whereas the explosion it triggers releases kinetic energies in the range of more than ~10,000 J! So what happens when the bullet hits the melt? With impact a shock wave travels through the melt, hitting the vapour film and causing it to collapse, triggering the following chain reaction:

It is important to keep in mind the time-scales of these processes. Cracks propagate with enormous speeds, much faster than sonic speed in air [2], so we talk here about microseconds. A blink of an eye takes ~100 ms. So we talk about processes which are 10,000 -100,000 faster than that!

Simply put fragmentation happens too fast for the water to transform into steam. (Physicists might note that if water would transform into steam the heat transfer from melt to steam in step 2 would not work efficiently, since the heat transfer coefficient is much lower.)  In fact it is not until the fragmenting melt is fractured and the entrapped and expanding water is in contact to the outside, that the overheated water can finally vaporize.

What we see as "explosion" - the ejection of fragments by the expanding steam - is in fact only the last stage of energy transformation that takes place in an MFCI. The more interesting part in terms of fine ash happened in the fragmentation phase before.

Using the term "steam explosion" is therefore not completely wrong, but it is a bit misleading, since it does not catch the full thing.

Here is a flow chart illustrating the steps discussed above: 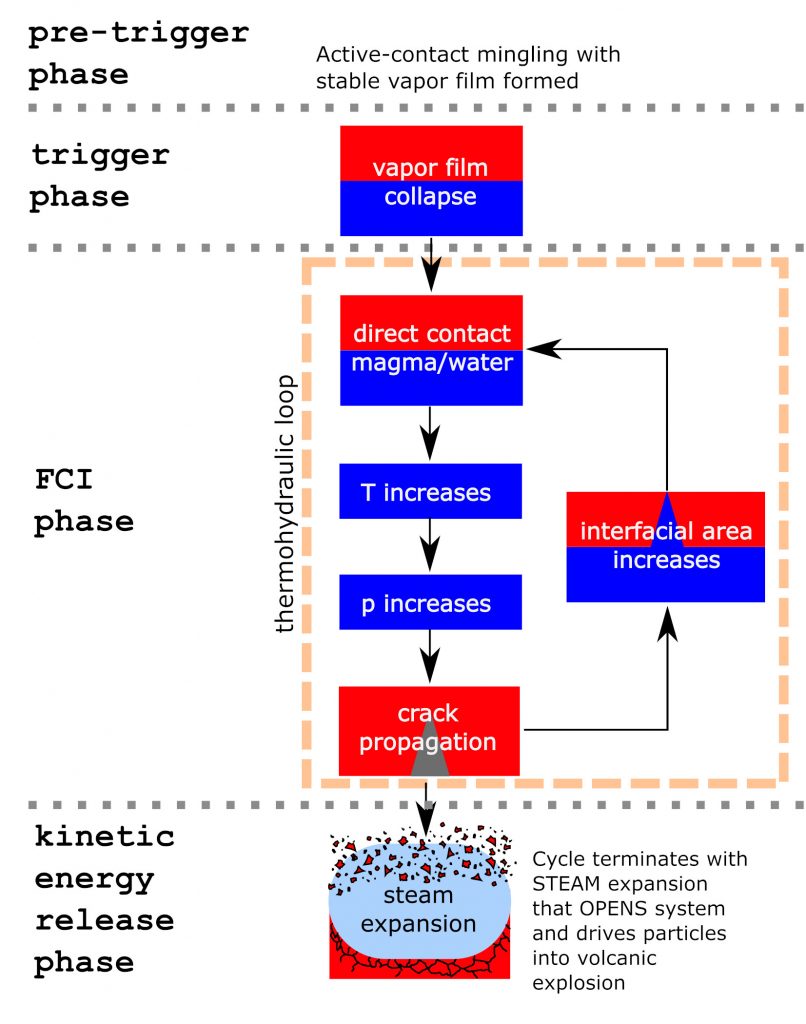 In a nutshell, what happens during an MFCI is that melt is fragmented driven by thermohydraulical energy transformation:

-> heat is transformed into mechanical energy

And since magmatic melt are super hot containing massive amounts of thermal energy (also because the heat capacity of silicate melts is pretty high!) this explains why MFCI usually produce lots of fine ash particles and release large amounts of kinetic energies.

So it appears that MFCI is a very hot candidate for what has happened in 2012 at Havre volcano!

However, there are two catches:

It is therefore hard to see, how MFCI could have happen at Havre volcano.

Instead, on our search for the "culprit", we found an energetic process similar to MFCI. A thermohydraulic fuel-coolant mechanism, which is independent from vapour films and works also for viscous silicic melts. 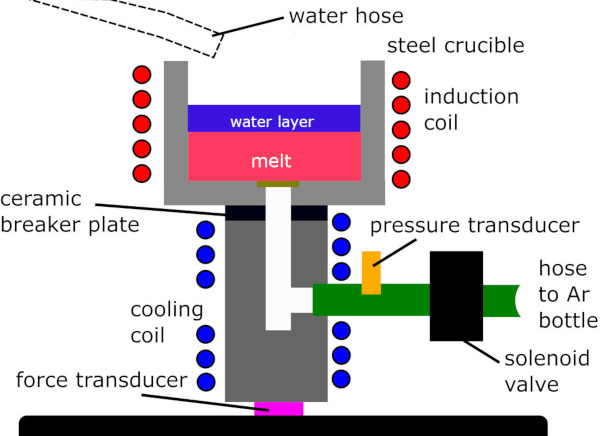 Experimental setup for IFCI run: Two seconds before stress is applied, a layer of water is added on top of the melt. Then the solenoid valve is opened and highly pressurized expanding gas "hits" the melt from below, initiating the IFCI. (Sketch adapted from Dürig et al. (2020) [1]).

In the lab, IFCI were succesfully reproduced by using a setup similar to dry stress-induced fragmentation runs. Thus, also for IFCI runs a magmatic melt was produced using a steel crucible that is inductively heated. Then fragmentation was initiated by stress applied by expanding gas, injected from below. The only difference to the "dry" runs was that before gas injection a layer of water has been added on top of the melt, via an additional hose.

Highspeed video of an IFCI explosion with a silicic Havre melt. Note that in contrast to the MFCI experiment, a layer of water was situated on top of the melt.

The effect of this extra layer of water is quite dramatic: In contrast to dry runs, IFCI runs produced considerably stronger explosions, indicated by stronger recoil forces recorded under the crucible, higher velocities of the particles, a louder acoustic "bang" and -most importantly- a significantly increased production of fine fragments. As we have discussed earlier, this is a giveaway for massively increased fracture energies. 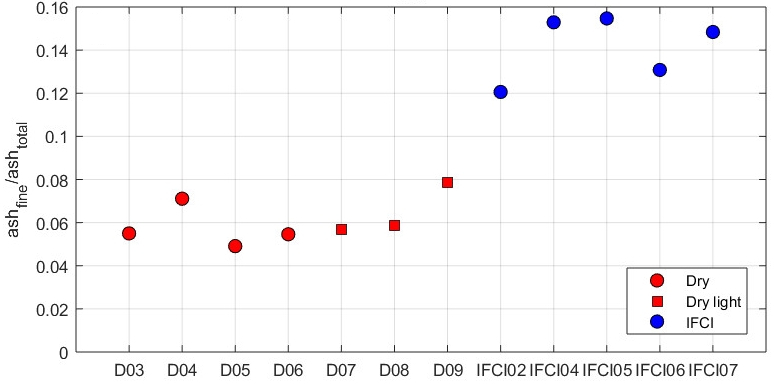 So - what just happened there? Where does this additional energy come from?

injected from below causes the melt plug to deform and build up stresses by elastical storage of energy. Cracks are initiated where the tensional stresses are highest - which is on the top of the melt that forms the interface between magma and water. As a result water is pushed into the newly formed cracks and the IFCI chain reaction is initiated:

This feedback cycle accelerates, until the melt plug "breaks" through.

Schematically, an IFCI can be illustrated by the following flow diagram: 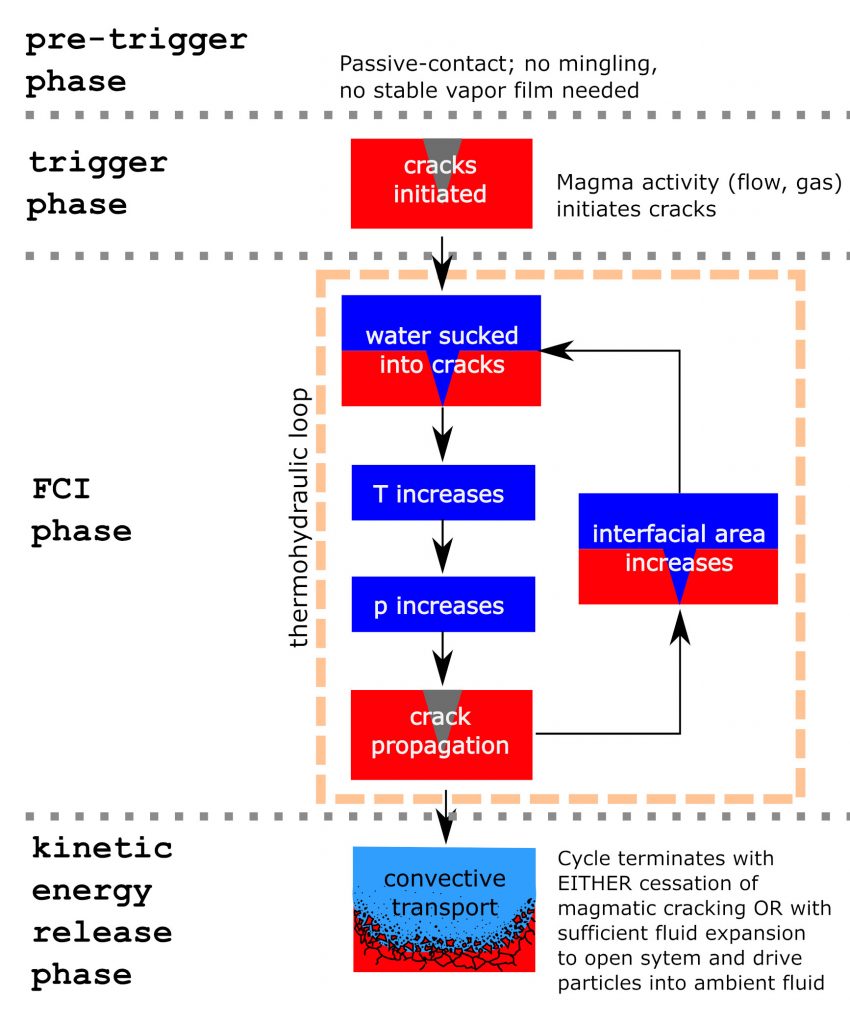 As you see in comparison to  MFCI, the IFCI mechanism works very similar - especially during its FCI phase. Like for MFCI explosions, in the decisive stage of fragmentation, water is in its liquid state and serves as a thermohydraulic "conveyer" that transforms heat into mechanical work and fracture energy. Simply put the water serves as a very effective heat powered "wedge" that boosts fragmentation.

Yet, IFCI features also some quite important differences towards MFCI:

Especially the last point is an important discovery, since this means that IFCI can also work in submarine conditions at depths well below 100 m - depths for which it was widely believed so far that thermohydraulic explosions could not occur.

In fact, there are a couple of arguments for IFCI being a mechanism that works even more effictively for deep-sea submarine settings [3]: 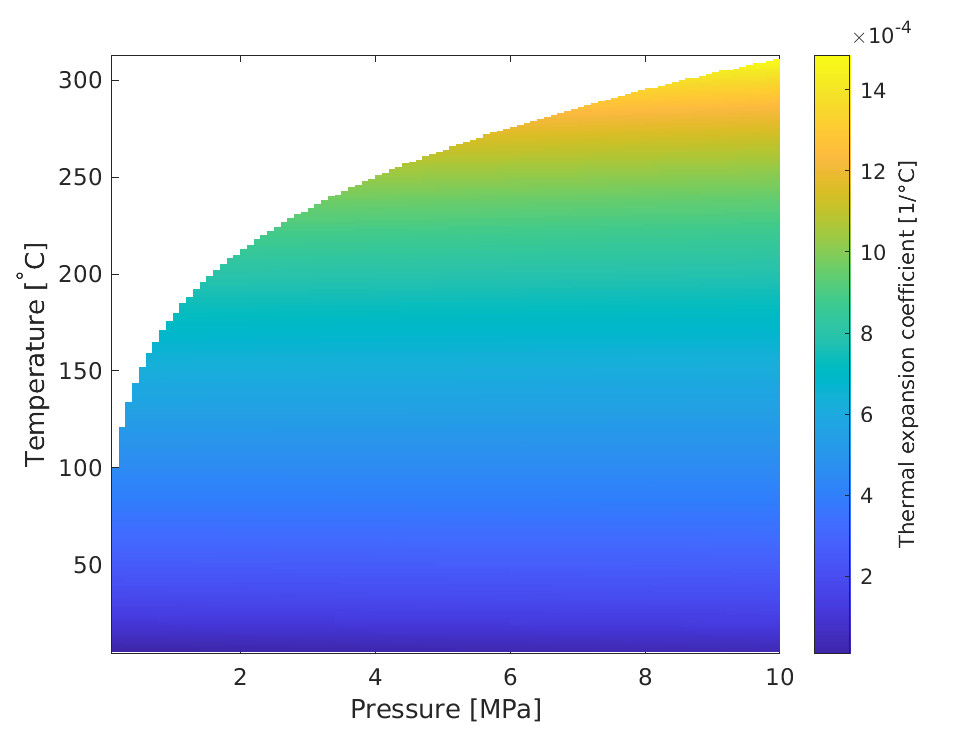 Thermal expansion coefficient under variation of pressure and temperature for water. Note that at higher pressures the boiling temperature increases. (Figure adapted from Dürig et al. (2020) [3].)

As you can see, with increased pressure, higher temperatures can be achieved - due to the fact that the boiling temperature is raised. With increased temperature, water features higher thermal expansion coefficients. Water at 1,000 m depth can reach 310°C.  At  that temperature, it expands more than twice as much as under lab-conditions (0.1MPa), when provided with the same amount of heat!

We therefore have therefore found a mechanism that by converting heat into mechanical work "boosts" regular fragmentation. A fragmentation process which works not only for melts of low viscosities, but also for rhyolites, and whose efficiency is even increased under deep-sea conditions. So we have a hot lead here, for what has happened at Havre!

What we now need is the 2D morphometrical fingerprints of fragments generated by IFCI experiments, to be able to compare them with the ash grains sampled at the eruption site.

This, however, turned out to be a bit more tricky than one might think.

The lines of thought above are based on considerations detailed in Dürig et al. (2020) [3], if not cited otherwise. Please let me know if you have any comment or suggestions for changes. My email address is: tobi[_at]hi.is