As pointed out in an earlier post, in IFCI experiments the melt is fragmented by two different mechanisms:

The particles produced in these experiments are therefore expected to be a mixture beween "dry" and IFCI fragments. How to separate them?

In open configuration, the bulk of the particles generated in IFCI runs was deposited over the experimental area (i.e. the table and the lab floor), where they could be sampled.

Interestingly, fine particles could also be found inside tiny water droplets which were deposited on the ceiling and the walls of the shield surrounding the explosion site. 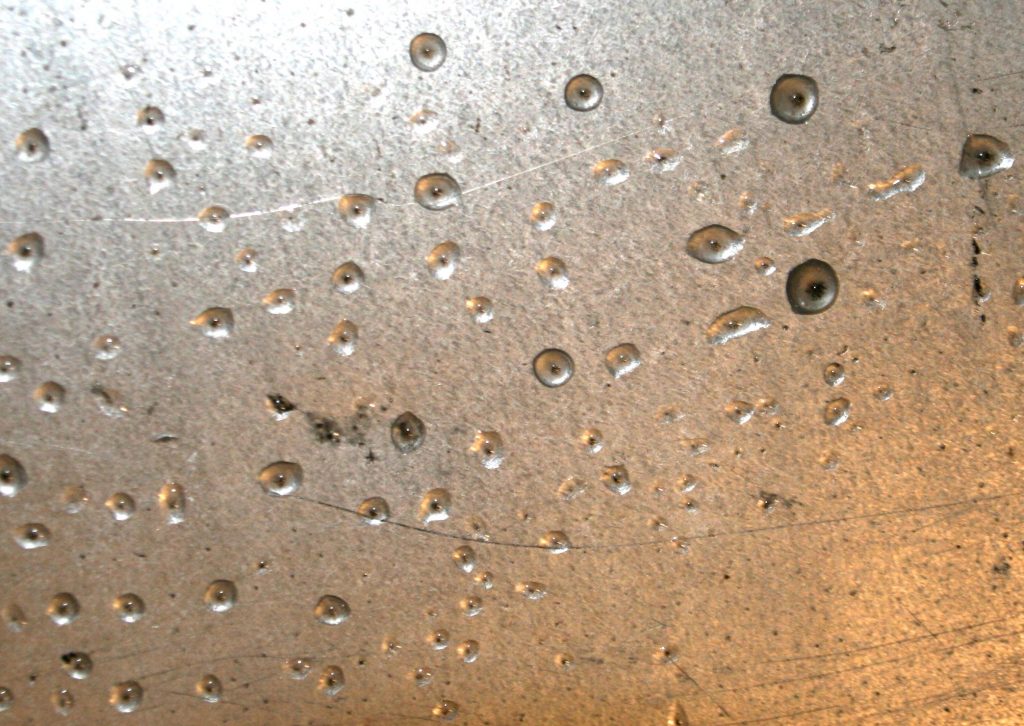 Water droplets containing fine fragments (visible as black substance) at the steel ceiling, 2m above the crucible. These droplets were part of the first ejecta front and contain therefore an abundance of IFCI particles. (Picture modified from Dürig et al. (2020) [1].)

We collected the fine fragments inside these droplets for microscopic analyses, because we had reason to assume that most of these particles were the products of IFCI, which we were searching for.

Let's again have a look into the crucible at the different stages of IFCI. In the used geometry water is intruding from above, and the cracks driven by IFCI are propagading downwards. Simultaneously the expanding gas causes deformation by pushing from below, until the gas jet "breaks through". In this late stage of the process, any kind of fragmentation is exclusively driven by stress (caused by the expanding gas).

We can therefore expect that the bulk of IFCI fragments are among those particles, which form - together with water droplets and steam coming from the ejected overlying water layer - the first, leading ejecta front. Since IFCI is a very efficient way to convert energy into mechanical stress, these types of fragments are predominantely fine "ash", and many of them get trapped inside water droplets during the first phase of their ejection.

In contrast, particles ejected at later stage are in majority generated by iso-thermal fragmentation - without thermohydraulic contribution via IFCI. These "dry" fragments are in average coarser. In the cloud of ejecta, we can therefore distinguish two phases: 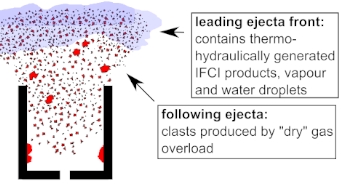 The two phases of ejecta: IFCI fragments are together with water droplets and steam part of the leading ejecta front. (Figure adapted from Dürig et al. (2020) [1].)

In order to verify our theory and to separate the two phases of ejecta, we modified the IFCI setup, by mounting a (flipped) U-shaped steel tube above the crucible. The other end of the tube lead to a water bowl, filled with 600 ml of water. The following snapshots show what happens during such an "IFCI U-tube run":

IFCI run with "U-tube". This setup allowed us to collect IFCI particles from the leading ejecta front. (For movie in full HD see Dürig et al. (2020) [1].)

So what happened here? Let's look into it step by step:

1.) In the first phase of ejection, the leading front of IFCI particles, water droplets and vapour is injected through the tube into the water bowl.

2.) when the coarser particles of the following ejecta front enter and hit the  tube walls, it is decoupled from the setup and "carried away" by their impetus.

3.) the crucible orifice is now open, and the residual ejecta are following ballistic "free air" trajectories. Only a very small amount of them happen to land in the water bowl.

We know therefore that the particles deposited in the water bowl are from the first front of ejecta.

As final step, we conducted morphometric fingerprint analyses and compared the shapes of particles generated in the lab with the morphology of ash particles from the Havre eruption.

The lines of thought above are based on considerations detailed in Dürig et al. (2020) [1]. Please let me know if you have any comment or suggestions for changes. My email address is: tobi[_at]hi.is