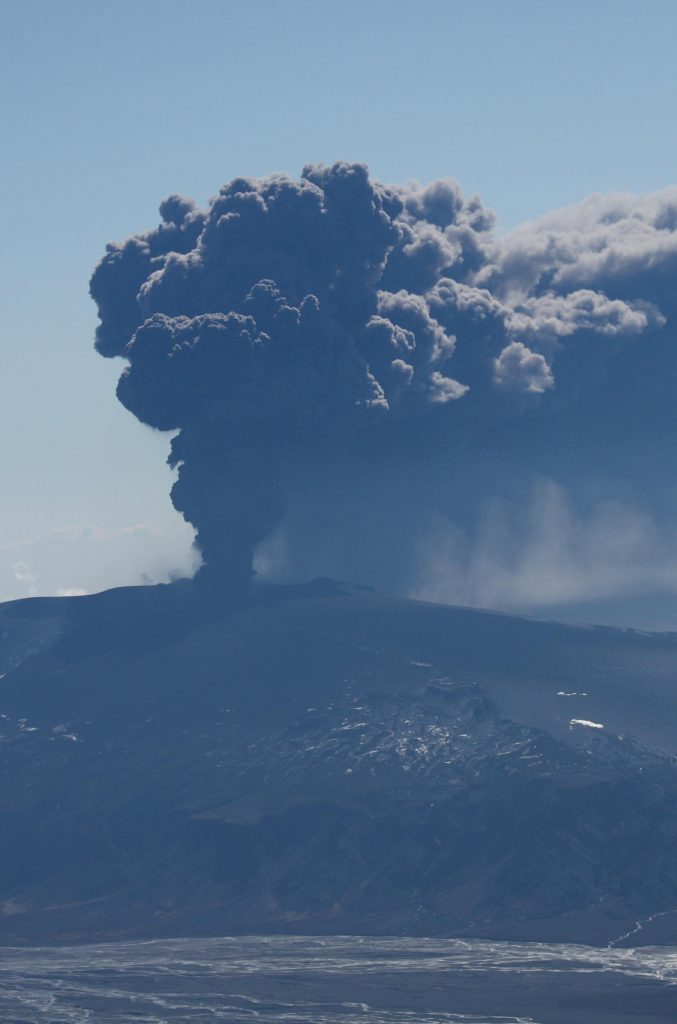 Another picture of the Eyjafjallajökull 2010 ash plume. Note the "curtain" like fallout of tephra on the downwind sector. [Photo taken by Magnús Tumi Guðmundsson]

Who, when given the task to sketch a volcano, could resist drawing a big threatening mushroom-shaped cloud above its top? This characteristic feature is a phenomenon  known as "volcanic ash plume."

An engineer would describe volcanic ash plumes as hot turbulent multiphase flows made of volcanic gases and "pyroclastic" particles, which originate during explosive eruptions as the result of magma fragmentation. Volcanic ash plumes form when the eruptive mixture issues from the volcanic vent and, depending on the fluid dynamic conditions at the source, can become buoyant during the ascent into the atmosphere due to its expansion and the entrainment of external air. These eruption columns can inject potentially hazardous amounts of ash into the atmosphere and are - due to the inherent complexities - very challenging to describe. This makes the study of eruption plumes one of the most exciting problems in volcanology.

Why should people bother with describing ash plumes by more or less complex mathematical and physical models? Let me convince you that knowing what is going on is always better than "getting surprised":

Under certain conditions eruptive columns can get instable and collapse under their own weight. As a result the mass of hot ash, gas and steam pounds its way from the impact site with high velocities as swift and deadly "pyroclastic density currents" or "PDCs".

For phycisists among the readers: in a collapsing column potential energy is transformed into kinetic energy. To give you an idea of the mass, consider that a typical value for the mass flux of a medium sized eruption is 108 kg/s.

For non-phycisists: imagine a 25 kg cement bag thrown out from a helicopter hovering at 500m above you and impacting right in front of your feet. Now imagine the same scene happening again, but this time the mass of the "cement" plunging to earth is 4 million times as big - then you get an idea of what happens if only a second of a "medium sized" ash colummn gets instable and collapses...

The snapshot below shows a column collapse in a large-scale simulation shooting ash into the atmosphere with a big gun. It was filmed during a series of experiments conducted in 2008 in a quary at Spinazzola, lead by University of Bari in collaboration with Physikalisch Vulkanologisches Labor, Uni Würzburg [1-3]. In the depicted experiment we used 300 kg of ash (equivalent to 12 "cement bags"). 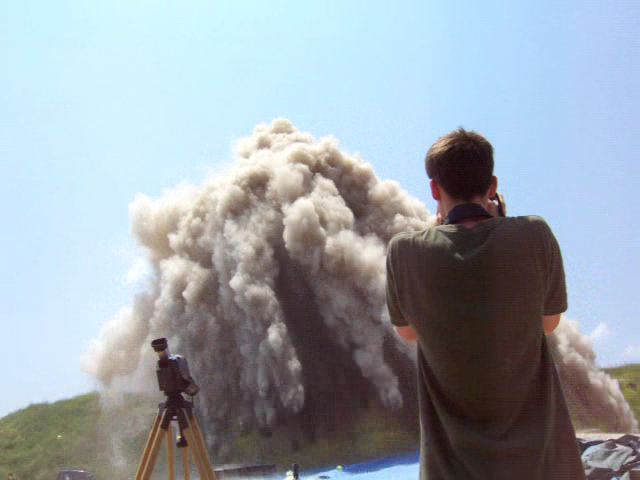 No country for lazy lizzards - snapshot from a collapse run taken in 2008 during the Spinazzola large-scale ash plume experiments. Note the "tentacles" shooting towards the ground. Once when hitting it, pyroclastic density currents are rushing down the blue hill.

From these experiments, it was possible to derive a stability criterium - and predict when a column is stable or about to collapse. (Pretty cool, eh? The lizzards at the site would have been happy to have had a warning system.) 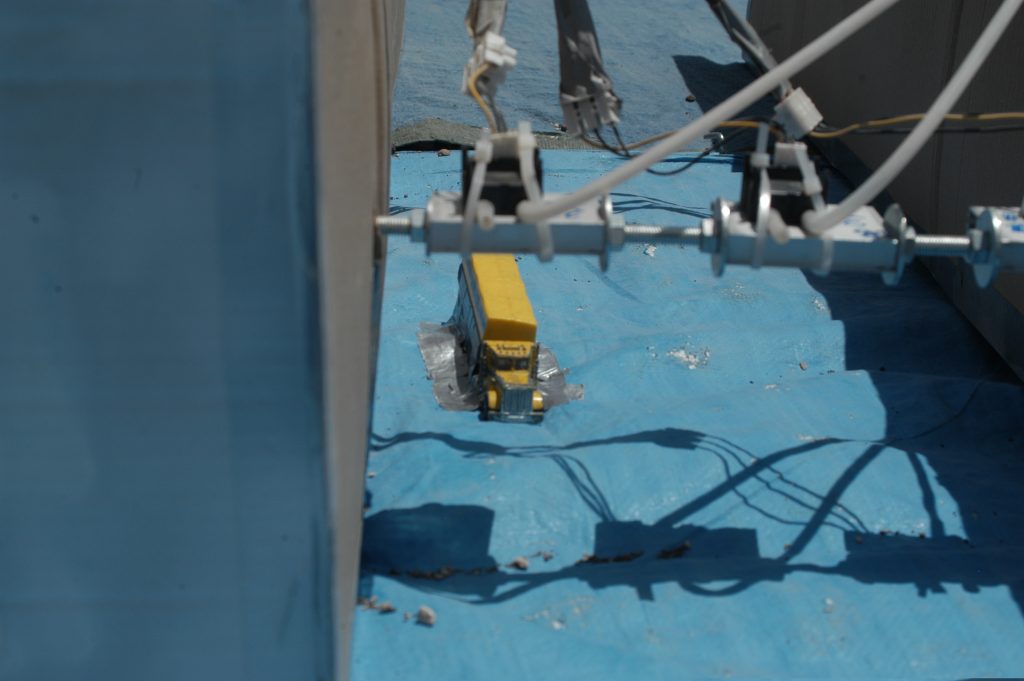 Matchbox truck on a miniature "street" at the foot of the blue hill. The "street" is formed by cardboard boxes (simulating "houses"). This picture was taken just before the experiment. 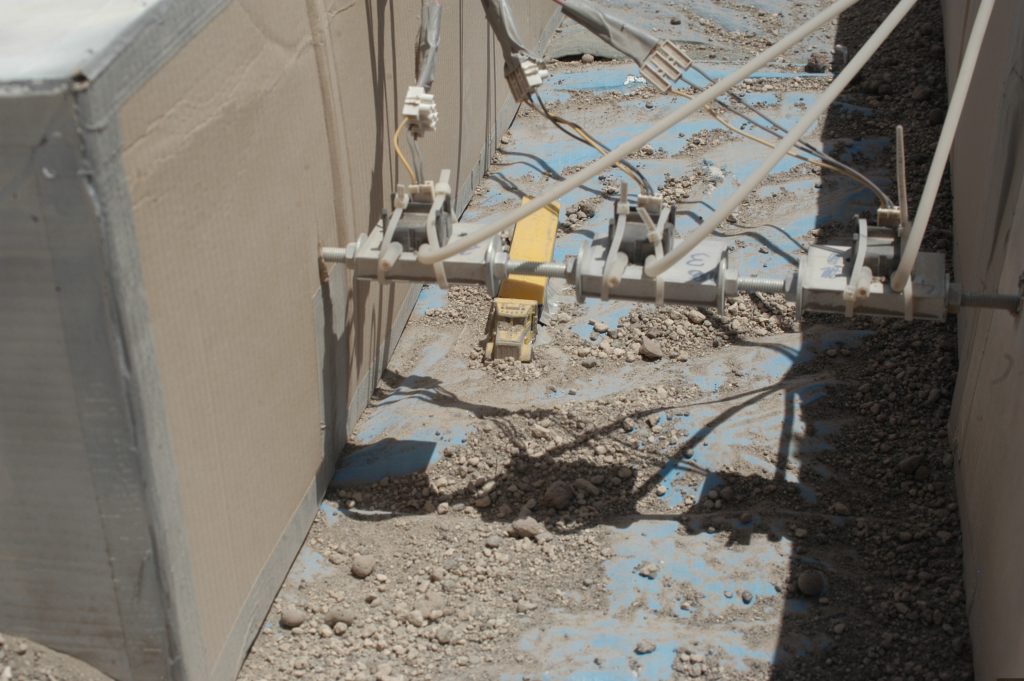 Same truck, same "street" after the PDC rushed through. The wires and hoses are for measuring pressure and particle concentrations.

Of course the 'gun' we used had the advantage that we knew a lot of things in beforehand ("vent" diameter, conduit geometry, input energy, grain size distribution,...). In a real volcano the boundary conditions are certainly more obscure and complicated.

But back to volcanic ash plumes and their hazards. Even when being perfectly stable and convectively rising, ash injected into the atmosphere by volcanic plumes can cause tremendous problems, e.g. by affecting the climate (as experienced in the Tambora eruption 1815, which resulted in 1816 being "the year without summer"). Furthermore, even when living tens of km away from the eruption site, living being's health might get negatively affected by inhaling fine volcanic "ash", depending on wind direction and fallout conditions. "Ash" is a term which describes pyroclasts with a grain size of smaller than 2mm. Ash grains are chemically and morphologically very similar to grinded glass dust, which explains why it is not particularly healthy to inhale them. 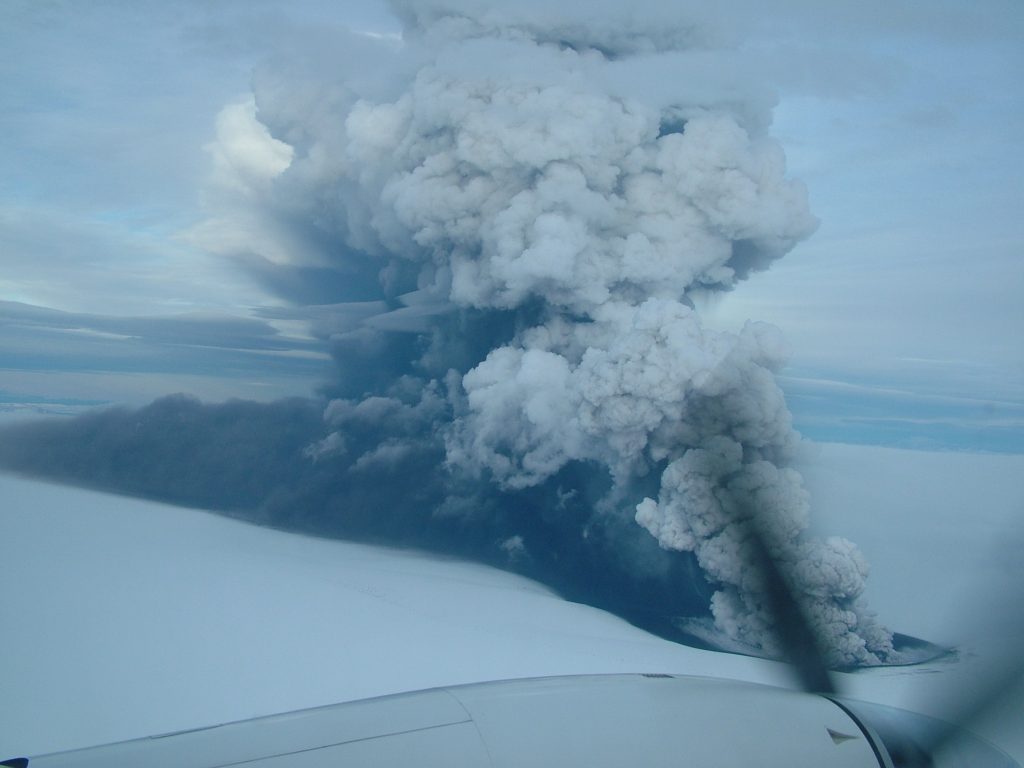 The 2004 ash plume of Grímsvötn (a subglacial volcano). Due to favourable wind conditions the European air traffic was barely affected by this eruption, other than the Eyjafjallajökull eruption, six years later. [Photo taken by Magnús T. Guðmundsson]

In modern times (well, okay - let's better say "since the 80s") , it turned out that atmospheric volcanic ash can pose a serious threat for aviation and air-travel infrastructure. Glassy volcanic ash particles can stall jet turbines and scratch the front windows to opaqueness. This potential hazard was the reason why the relatively modest sized 2010 Eyjafjallajökull eruption caused ~100.000 cancelled flights and left ~7 million flight passengers stranded, causing economic losses of >$5 billion [4]. It was this particular incident which raised awareness in the political spheres of the "wealthier economies", and lead to an increased demand for model forecasts capable to display the location of ash clouds with contours of ash concentration. Decision makers hoped that such "concentration charts"  could then be used to provide a basis to determine no-fly zones. However, after 2 years of evaluation, the International Volcanic Ash Task Force had to come to the sobering conclusion that the accuracy of model-based cloud concentrations was not reliable enough to justify the use of such “concentration charts” and recommended to discontinue their issuance [5-7].

One of the crucial problems limiting the accuracy of concentration forecasts is the significant uncertainty in characterizing the source conditions of explosive eruptions and some of the fundamental processes taking place during the plume evolution (e.g. entrainment of external air into the clouds). 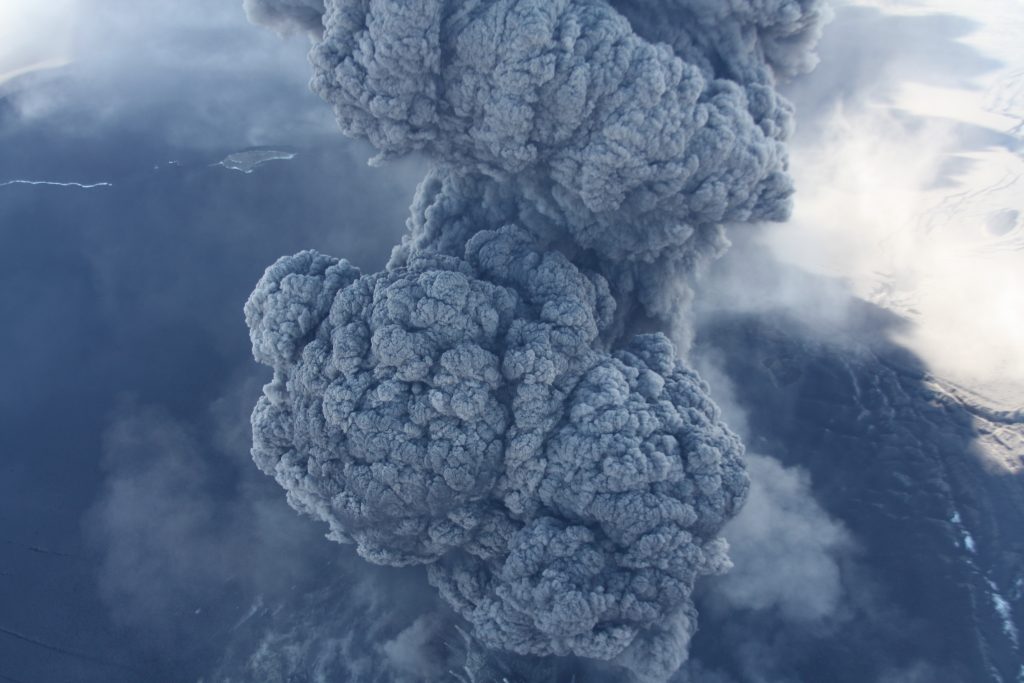 Close-up picture on the Eyjafjallajökull ash plume from above, indicating the complex dynamics behind these highly turbulent multiphase flows, which are composed of ash, gas and steam. [Photo: courtesy of Magnús T. Guðmundsson]

In other words: we cannot predict the ash concentration in the atmosphere if we do not know how much ash per time is injected by taking  the volcanic ash plume "lift".

In general we distinguish two major groups of  parameters which are relevant to model the atmospheric ash concentration: atmospheric parameters (such as wind and moisture along the vertical profile) and the above mentioned "source conditions". The latter are parameters which characterize the flow conditions at the vent and comprise, e.g., the vent geometry, the mass flux (also known as "mass eruption rate" or "MER"), which is the mass of ejected material per time, and particles’ properties (grain size distribution, density, shape and mass/volumetric concentration).

As you might have guessed from the acronym of MAXI-Plume - and from the fact that it has so many different designations - it is the mass flux, which is considered to be the most important source parameter for a model-based description of volcanic plumes.

Unfortunately, the mass flux is also the parameter most difficult to obtain. 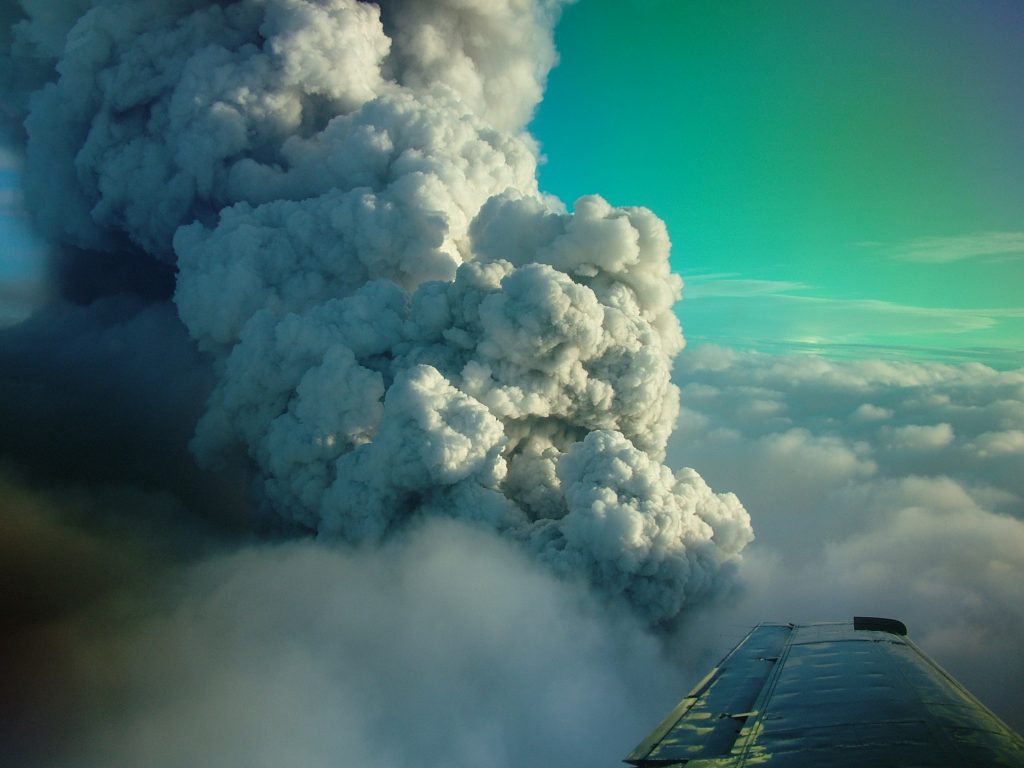 Punching through the clouds: Ash plume of the 2004 Grímsvötn eruption. [Photo: courtesy of Magnús T. Guðmundsson]

-> How to assess the mass flux of a volcanic ash plume