What we do in the labs

So, what has caused this abundance of ash during the 2012 Havre eruption? Let's draft a list of "major suspects", i.e. potential ash generation mechanisms that could have produced these fragments:

Each of these mechanisms were reproduced in the lab in Würzburg.

We have previously discussed what affects the shape of fragments. Important controlling factors are [1]: pre-stresses (which affects the locals stress distribution); the existence of shock-waves; and how exactly the driving stress was generated. The latter factor can be basically broken down to the question:

"Which amount and what kind of energy was driving fragmentation?"

It is therefore usefult to discuss the "energy question" for each of the listed fragmentation mechanisms.

Imagine you have a drinking glass and heat it up to 230°C in a pizza oven. If 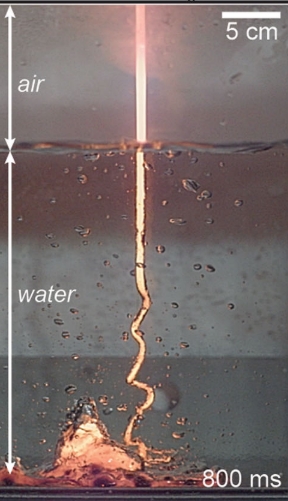 Thermal granulation experiment with a basaltic Grímsvötn melt at a temperature of 1300°C, poured into water. (Adapted from Schipper et al. (2013) [2])

you put it out and fill it with cold water, chances are high that the glass will crack and shatter. This process is called "thermal granulation", and it is the more efficient the larger the temperature contrast between hot melt and coolant is.

When magmatic glassy melt is rapidly cooled by water, what happens is that immediately a crust is formed at the interface. With cooling the melt contracts, and the hotter (and more moveable) inner parts of the melt exert tensional stress on the colder (more rigid) crust. As described in an earlier post, mechanical stress is the fuel that drives the cracks - so no wonder, that qenching cracks are observed, when magma meets water.

In the Physikalisch-Vulkanologisches Labor, Uni Würzburg, thermal granulation was reproduced by remelting crushed Havre dome rock (as well as pumice), using an induction coil. Then the melt was extruded and plunged into a water tank.

An alternative approach is to heat coarse ash or lapili to 500°C and pour the grains into a water container.

Thermal granulation experiments with lapilli sized dome rock grains. These particles were heated to 500°C before being poured into a calorimeter containing 3 l of water at room temperature.

To mimic abrasion, pieces of pumice were "scrubbed" against each other over a piece of paper. Simple, but effective.

And it is also simple to identify the energies "responsible" for producing these particles: the mechanical energy was provided by the person who grinded the pieces of pumice against another. 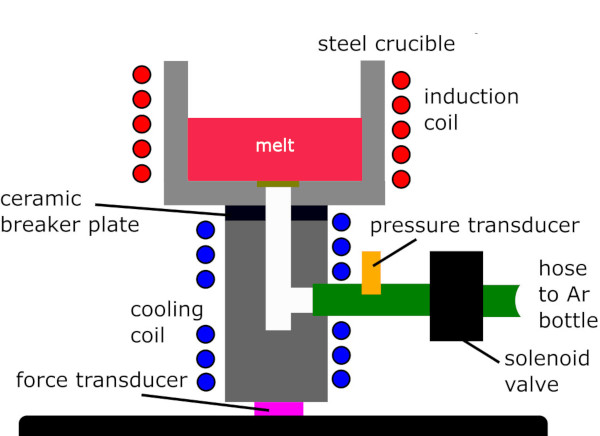 "Dry" stress-induced melt fragmentation run routines are used to determine material-specific fragmentation and kinetic energy release rates [4]. In these experiments, pressurized argon is injected from below at high pressure into a cylindrical plug of melt that behaves brittlely when deformed by the expanding injected gas. When the critical shear stress is reached the plug breaks, with elastically stored energy converted into fragmentation and kinetic energy. The pressure of the driving gas is measured, and a force sensor under the crucible recorded recoil of the system.

The following flow chart illustrates what happens in a "dry" stress-induced fragmentation run. 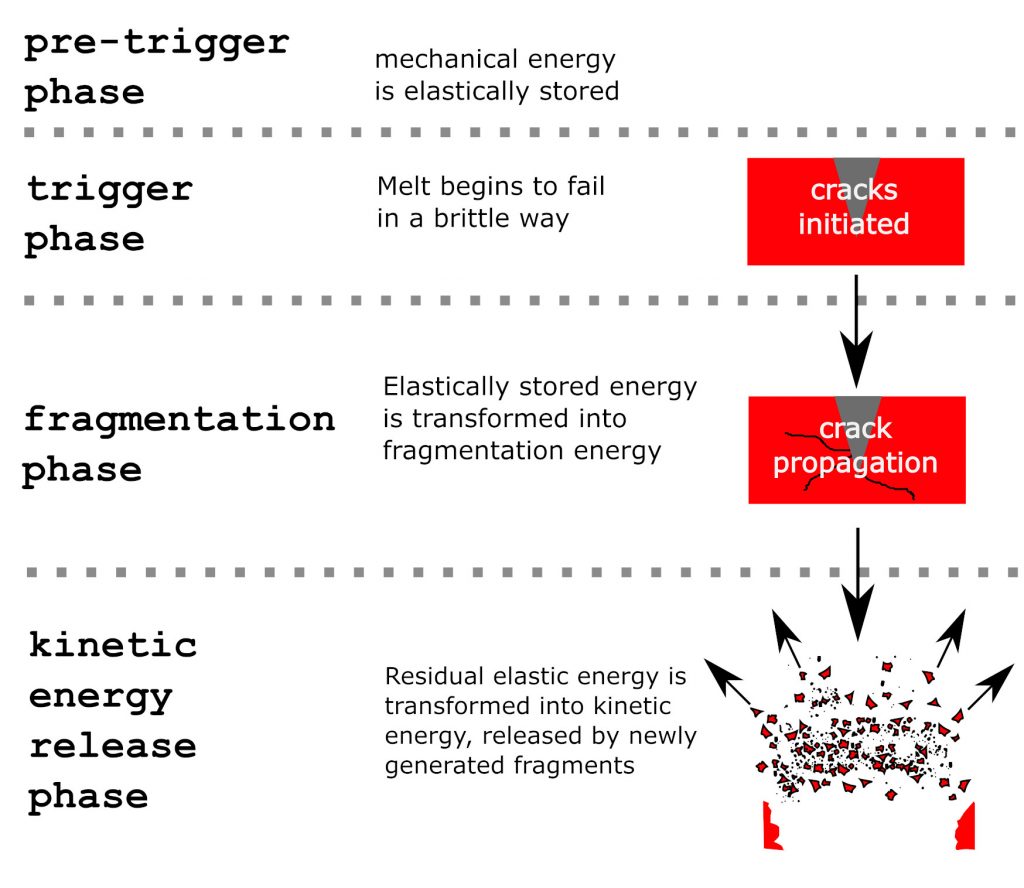 So which energy is causing the melt to fracture? It is purely mechanical work, applied by the expanding gas. (The use of gas has the great operational advantage that we can control its volume and pressure - and thus the input energy, which is simply the product of these two parameters [4].)

The mechanical energy input is therefore provided by an external source and - and not by the melt. Importantly, the temperature of the melt does not (or at least not much) change during the few ten microseconds of fragmentation. Physicists would therefore call this type of fragmentation a "quasi-isothermal" stress-induced process.

This is a crucial difference to fuel coolant interaction processes, which are discussed in the next post.

The lines of thought above are based on considerations detailed in Dürig et al. (2020) [3], if not cited otherwise. Please let me know if you have any comment or suggestions for changes. My email address is: tobi[_at]hi.is