Thorbjörn Sigurgeirsson (1917-1988): a brief overview of his life and scientific work 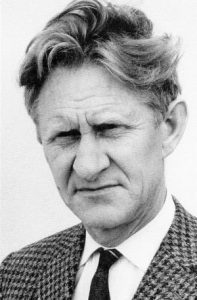 Thorbjörn Sigurgeirsson was born in the north-western part of Iceland on June 19th, 1917, the eldest of five brothers.

After graduating from the Akureyri Gymnasium in 1937 he studied physics at the University of Copenhagen, obtaining the mag. scient. degree in the spring of 1943. Although his final thesis was on theoretical nuclear physics with Christian Møller as advisor, he also did a lot of experimental work at the Institute of Theoretical Physics at Blegdamsvej, e.g., with J. C. Jacobsen. During the stay in Copenhagen, he became a good friend of Niels Bohr and his family. 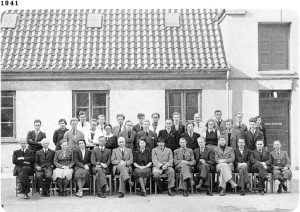 A 1941 group photo at the Institute of Theoretical Physics, taken in front of the laboratory annex at Blegdamsvej. Standing behind the front row of sitting dignitaries, Sigurgeirsson is the third person from the left. - Photo: The Niels Bohr Archive.

On December 6th, 1943, the German Wehrmacht occupied Bohr’s Institute. Soon afterwards, Sigurgeirsson escaped to Sweden by a fishing boat, and worked for a while at the Nobel Institute for Physics in Stockholm. He then flew to Great Britain, and from there returned to Iceland in March 1945 after a perilous eleven-day sea voyage in an artic convoy.

Sigurgeirsson in Sweden in the summer of 1944. Photo: From an article by S. J. Erlingsson (A7).

Back in Iceland, the only research position available was in biophysics at Keldur, a new institute for experimental pathology. To qualify for the position, Sigurgeirsson went to the US on a Rockefeller grant in July 1945. He studied viruses, first with Max Delbrück at the Cold Spring Harbour Laboratory, and then with Wendell M. Stanley at the Rockefeller Institute in Princeton. However, the atomic bombings of Hiroshima and Nagasaki in early August 1945 changed his plans for the future. Sigurgeirsson realized that a deep knowledge of modern physics would soon be in great demand, and later that year he decided to drop biophysics in order to return to his old love, nuclear physics.

In the beginning of January 1946, he joined John Wheeler´s “Cosmic Ray Laboratory” at Princeton University. There he obtained important new experimental results on the properties of cosmic ray mesons. He returned to Iceland in the fall of 1947.

As soon as he arrived in Iceland, Sigurgeirsson started to lay the general foundations for future academic and applied research in the physical sciences. Although not particularly interested in administrative work, he served as the director of the National Research Council (1949-57) and as chairman of the board of the Nuclear Energy Commision (1956-64). In the years 1947 to 1957 he also taught physics part time, both at the gymnasium level and in the engineering department of the University of Iceland. In 1957 he became professor of physics at the University. As such, he had a heavy administrative load in addition to the physics teaching and his scientific research.

While at the National Research Council, Sigurgeirsson investigated radioactivity in Icelandic rocks, made gravity measurements in collaboration with French scientists, and studied the temperature of geysers and active volcanos. During the winter of 1952-53 he was at CERN in Copenhagen, doing theoretical work on the magnetic focusing of charged particles in synchrotrons.

Preparing for a flight in the summer of 1969. The rocket-like object on the ground is the magnetometer. During measurements it hung below the plane. Sigurgeirsson is handling the cable connecting the magnetometer to a recorder inside the plane. Photo: Leó Kristjánsson.

Back in Iceland, in 1953 Sigurgeirsson initiated the first of several research projects related to geomagnetism. He became a pioneer in the study of palaeomagnetism, established in 1957 a magnetic observatory at Leirvogur (still in operation), and carried out a complete aeromagnetic survey of Iceland, piloting the aircraft himself. The survey started in 1968 and ended in the 1980s. For all this work Sigurgeirsson designed very sensitive novel types of magnetometers and other instruments, constructed at the University.

Already in 1958 Sigurgeirsson had established a so-called “Physics Institute” in the basement of the main University building. The laboratory grew slowly through the years, and finally became an important part of the Science Institute, founded in 1966. Sigurgeirsson, who played a key role in establishing the new institute, was also the director of its Physics Division from the very beginning until 1975.

Due to nuclear weapons testing of the superpowers, several instruments were designed and build at the Physics Institute in the 1960s in order to measure radioactivity in air, rainwater, groundwater etc. In 1962 Sigurgeirsson also got interested in geochronology and for this purpose invented the so-called 40Ar/39Ar technique for K-Ar dating, which he only described in an Icelandic publication. The same technique was independently discovered by C. Merrihue in 1965.

Soon after the Surtsey volcanic eruption in 1963 Sigurgeirsson initiated measurements of volcanic gases as well as research on magnetic and seismological activity on the newly formed island. During the Heimaey eruption in 1973 he became famous in Iceland and abroad for the successful implementation of his idea of spraying the lava with seawater, thus changing the course of the lava-stream and as a result saving parts of the local town and its harbour. 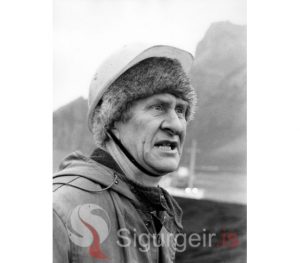 Sigurgeirsson was a pioneer in Icelandic physics research and in the teaching of physics at the University of Iceland. He was universally respected for his first-rate intelligence, resourcefulness, and professionalism, as well as his administrative skills and kindness to others.

In 1948, Sigurgeirsson married Thórdís Thorvarðardóttir. They had five sons. He died of heart failure on March 24th, 1988 at the age of 70.

A. In writing this overview I have used the following references:

B. Selected publications of Thorbjörn Sigurgeirsson (mostly borrowed from A2):