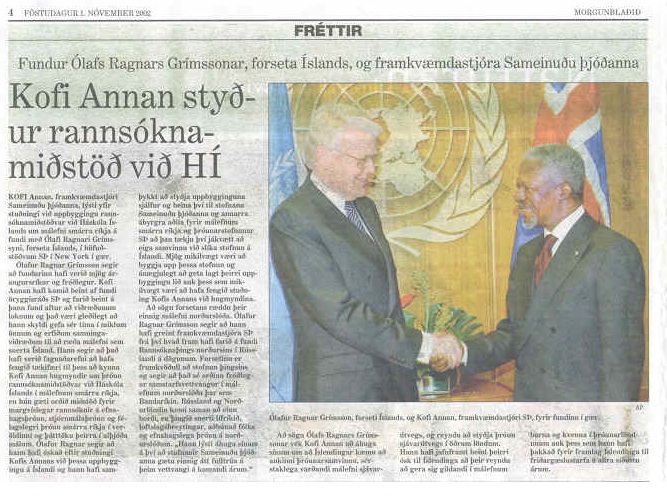 During a meeting at the United Nations Headquarters in New York, October 31, the President of Iceland, Mr. Ólafur Ragnar Grímsson presented the idea of a Centre for Small State Studies to Mr. Kofi Annan, the Secretary-General of the United Nations. Mr. Grímsson was very pleased for the opportunity to introduce the Centre and to discuss with Mr. Annan the possibilities of such a Centre doing research regarding economic, political, social development in small states and small state participation in international affairs. The President asked for the Secretary-General´s support for the Centre and Mr. Annan agreed to give it his personal support and also to encourage institutions of the UN, other responsible parties in small state affairs, and Economic and Social Council to collaborate with such institution in Iceland. Mr. Grímsson stated in the interview that he believes the establishment of the Centre to be very important and he is pleased with being able to give it his support but moreover emphasised the importance of having the Secretary-General’s support. (Abstract from Morgunblaðið, the main newspaper in Iceland, 1 November 2002, See the article.)