New book in the autumn

This book is coming out in the autumn. It is about Shelter 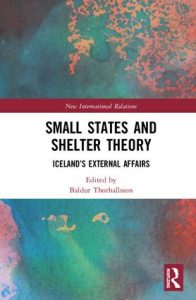 Theory, a new theory in small state studies, and Iceland’s External Affairs, from the British and American occupation in the Second World War to the present. It contains detailed analysis of Iceland’s relations with the United States, the Nordic states and the European Union. It also discusses Iceland’s shelter options in the future and its cooperation with China, Russia and Britian in a post-Brexit world.