Ask An Expert: What Would NATO Expect Of Iceland In Wartime?

The Grapevine asked Baldur Þórhallsson, Professor of Political Science and Research Director of the Centre for Small State Studies at the University of Iceland, this question:

“If the war in Ukraine expands to involve conflict with NATO, how would Iceland be expected to contribute as a member state?”

Iceland is well-known internationally for being a state with no armed forces. “There’s no appetite for an Icelandic army,” says Baldur. “It’s something that Icelanders tend to be very proud of. And we wouldn’t even know how to run an army. It is much better and safer to rely on the forces of our allies.”

So—other than the obvious financial methods—how could Iceland contribute to any NATO war effort? The security zone at Keflavík Airport is already used by member states conducting airborne and marine reconnaissance for the organisation, and could be used as a transport and logistics hub linking European operations to North America. “And you could locate a temporary hospital here, for soldiers or civilians, if you didn’t want to have it on the European continent,” Baldur observes.

Given the fact that enemy internet infrastructure is now likely to be a high-profile wartime target, Icelandic digital security expertise could form part of NATO’s defences, Baldur suggests. And medical, police and communications functions, which have traditionally been at the core of Icelandic foreign peacekeeping missions, could also come into play. “Iceland contributed to the policing of Kabul airport, and the airport in Kosovo,” says Baldur, “and is already sending people to work in communications for NATO in the Baltic states.”

But what about the possibility of fighting forces using Iceland as a base? About this, Baldur is quite matter of fact. 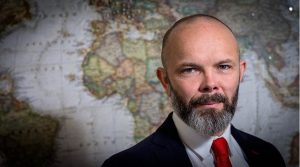