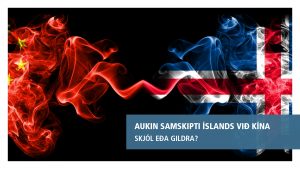 Lilliputian Encounters with Gulliver; Sino-Icelandic Relations from 1995 to 2021